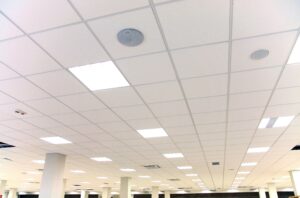 Although light emitting diode (LED) bulbs have been around for decades, widespread application has only become common during the past few years. Rapid advances in the technology that makes these types of fixtures possible is also helping to spur additional usage. While it’s true that the sun has yet to set on the era of the incandescent and fluorescent lamps, LRI Energy Solutions co-founder Stephen Troese Jr says LED fixtures are one of the best ways for buildings to cut down on energy consumption and utility needs. In this article, we’ll explore reasons why LED lighting is only going to become more prevalent as time goes on and why companies that undertake lighting efficiency and control projects now will be better positioned for the future.

According to Energy Star, an electrical current passing through a microchip will trigger the LED to switch on and produce the visible light we base our lives around. “When designed well, LED lighting is more efficient, versatile, and lasts longer,” Energy Star states, adding that a directional element can be incorporated into the design of LED bulbs. When compared to incandescent and fluorescent lamps, which throw light and heat from the filament in all directions, an LED bulb can be built to only shine light where we need to see better. Some studies expect the LED industry to be worth $23 billion within the next three years, so the signs of what’s on the horizon are becoming clear.

For building owners and facility managers in a position to re-fit their building with new lighting systems, Stephen Troese Jr has a few suggestions. His energy efficiency company has conducted lighting-specific upgrades since 1992 and those two-plus decades of work makes LRI an expert resource in this sector. Bi-level dimming, decorative atrium fixtures, custom mounts, improvements to existing fixtures and parking lot installations are a few of the projects that Stephen Troese Jr has helped his company complete over the past years. Energy Star also points out that manufacturing projects can produce bulbs in red, green and blue, but application of a phosphor material “that converts the color of the light to a familiar ‘white’ light used in homes” is often required. Stephen Troese Jr says that the wide range of applications and options makes projects that are as comprehensive as they are turn-key a worthwhile investment.