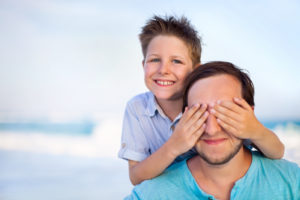 What do you do when the mundane becomes the norm? Stephen Troese Jr. thought that he was doing what he was supposed to be doing in life. He had a good job in sales where he pulled six figures, and he, along with his family, lived in an high-priced Fairfax home in a great neighborhood with excellent schools. Stephen Troese Jr. had it all, but deep in his heart, he felt that void. Everyday was the same. Every moment was a rehash of the day before with slight variations to avoid complete insanity.

What do you do when you no longer recognize yourself? You either become complacent and say hello to the stranger or you make a change. You take a chance and free yourself from the safety net of the upper middle class life in suburbia and see what else the world has to offer. And if you have a 12 year old son who you have failed to connect with in recent years in an effort to provide him with the best, you bring him along with you.

Stephen Troese Jr. wanted to go on a new adventure, and he wanted to strengthen the connection with his son Hunter. When Hunter was born, Stephen Troese Jr. understood what love really meant for the first time. As he gazed in his son’s innocent and unfettered eyes for the first time, he knew there was nothing he wouldn’t do to protect him and guide him on how to live a good life.

But, 12 years later, Stephen Troese Jr. was in a bind. He spent little time with Hunter or his wife, and he worked most days in the office late into the night. It was causing him stress, hindering his sleep, and hurting those relationships he cherished so much. Hunter might have had a father who he knew loved him, but he didn’t have a father that was there.

So, one day, Stephen Troese, went to his HR office and said he was going to take a leave of absence. He went to an RV dealership and bought an avocado RV that looked like a relic from the late 1980s. With his wife’s blessing, he sat Hunter down and said they were going on an adventure. When Hunter asked where, Stephen Troese said he had no idea. He hadn’t felt this alive in long time.

This site will focus on their adventures into the unknown together.